Sometimes I forget how to write. It seems impossible, the act of an imbecile stumbling through the vicissitudes wondering why the gods of creativity pointed their stifling fingers in my direction and declared, no more musings out of you. No matter the effort, every chosen word falls dead flat on the page, beyond resuscitation. 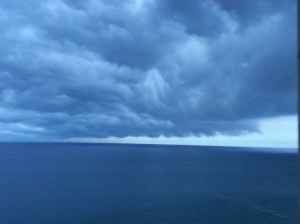 A picture, obviously, of my brewing mind

Days pass, sometimes months, before the staggeringly easy solution dawns on me: be creative.

Engage the intellect, be clever, do this or that and…such forced efforts fail as well. Laziness sets in, fluctuating between the highs and lows of a sensitive ego:  mostly it crawls across the bottom of the ocean of language like a lowly blobfish, unable to make a choice. Rarely it soars inexplicably high on a monstrous wave of self-convincing, becoming as comfortable as a politician or bombastic billionaire ignoring the naiveté he’s oblivious to.

Eventually, when least expected, when the ego sleeps, the storm dissolves and a peaceful moment comes along and something of apparent value gets created. Often it’s during a beach walk when the mind is lost in thought, an unrestrained burst of clarity emerges and the veins open up as the mind eases. I can’t walk two steps without filling my notebook with more thoughts surging to the surface. Without the ego’s burden the words flow weightlessly.

Eliminate the big id and the universe is at hand, writing becomes a meditation, a connection, a tapping in, and every once in a while the result comes freely out of nowhere, as if it wasn’t created as much as discovered, the mind acting as revelatory filter more than originator – an editor for a small niche in the cosmos – and the possibility of purpose rises like a hopeful sun.

I suspect it’s the same for all the arts, as well as scientific discoveries, great athletic performances, beautiful relationships, maybe even political negotiations…every planetary thought and action enhanced by surfing the sensually serene waves. It’s how I feel when listening to inspired music, such as the likes of Miles Davis, as if he shows me the notes already floating around in the ethos waiting for the right mind to enter into the flow and reveal it to the rest of us…

…the opposite of how I feel when listening to ego’s poison. Find a humanoid problem of any kind, anywhere, and more often than not, if followed to its root cause, stands an ego at the center of the hurricane spouting its hungry superiority. Even some successful artists develop annoyingly massive egos, but they’re usually after the fact (after success), after the creative work comes through, and then it’s the out-of-balance ego that gets them into trouble, followed by a return to balance to get them creating again.

A healthy ego can overcome the lack thereof and any crippling self-doubts, but feeding on success brews the egomaniacal storm, whereas being at peace with the world – in the zone, if you will – provides the mystery, the magic, the beauty…the quality of eternal bliss… 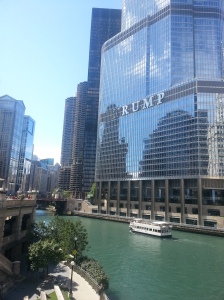 A shadow on his building appropriately editing his name

Surely a healthy ego is necessary to be an effective president, but I can only imagine the annihilating damage a narcissist would cause if it pushed its way into a position of unbridled power. Normal checks and balances already in place would be bursting at the seams to control the carnage.

If balancing the ego, avoiding those unhealthy highs and lows, is necessary to create anything of value, what monstrosity would he create? His buildings provide a clue – monuments exalting his name in huge letters without any environmental consideration or respect for others (complaints about his building’s sign in Chicago (picture to the right), polluting the skyline with his name, have been ignored).

Could such a highly unlikely presidential scenario take place?

Americans giving us eight years of George Bush is proof enough, though at present I’m not too concerned. A man like T-rump bullies his way into getting what he wants (we don’t like dealing with bullies so we tend to get out of the way of their destructive path). Luckily he can only bully those he confronts; he can’t bully the remote voter, just sucker into support those easily enamored by celebrity and wealth, fermenting with shallow dreams of their own in hopes for the same because it is the only life path they know.

Listening to Bernie Sanders offers the opposite, an end to the political madness. If only enough Americans could overcome their fear of the socialist label and listen to what he has to say, perhaps an impressive groundswell could change the country. The fact that he refuses to entertain reporters baiting him to jump on the Hillary attack bandwagon is impressively revealing about a balanced ego.